Treasures of the Royal Courts, the latest seasonal exhibition at the Victoria and Albert Museum, takes for its theme diplomatic gift-giving between England and Russia from 1509 to 1685.

Keen to develop trade links between the two kingdoms, the English and Russian Royal Courts engaged in what historian Helen Rappaport has called ‘an orgy of gift-giving’, with Russia offering furs and practical construction materials in exchange for English luxury goods. There are plenty of spectacular examples in this exhibition, notably a collection of fine silverware which survived the English Civil War only by grace of having previously been gifted to Russia (the silver is on loan from the Moscow Kremlin Museums). The most striking piece of silverwork is Christian van Vianen’s 1635 Dolphin Basin, a beautiful, illusionistic piece which is also the inspiration for the one contemporary exhibit on show, Union, a commissioned sculpture by artist silversmith Miriam Hanid. 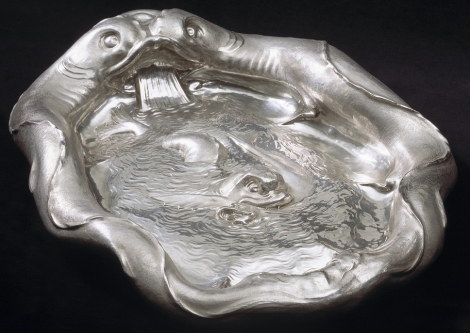 The first sections of the exhibition are dedicated to exploring the pageantry and extravagance of the English Royal Court, displaying treasures such as Henry VIII’s armour, the remarkable Hampden portrait of Elizabeth I, and a plethora of jewellery, decorations, miniatures, heralds, maps and documents. If I have one criticism, it is that the exhibition theme seems to have been quite loosely applied and, beyond their evident aesthetic and historical value, it is hard to tell exactly how all the objects relate to negotiations with the Russian tsars.

Nonetheless, an impressive selection of fascinating objects is featured to full effect in this exhibition, and fans of royal history will certainly not be disappointed.

The exhibition is open until 14 July.