The Barbican’s latest exhibition, Pop Art Design, is a colourful and insightful exploration of the creative links between Pop Art and mid-20th century design, examining how creators of all disciplines wrestled with old conventions and sought inspiration in postwar popular culture.

As the first ever major exhibition to display Pop-era art and design together, Pop Art Design does an excellent job of demonstrating the dynamics of a creative dialogue that was rooted in the everyday life of a booming aspirational class. Faced with the unprecedented proliferation of mass advertising and commercial products during the 1950s, artists such as Richard Hamilton responded with works that were inspired by novel design and technology. Hamilton’s famous piece Just what is it that makes today’s homes so different, so appealing? (1956), credited by Barbican curators as ‘the birth certificate of Pop Art’, is a collage of various American magazine images in which Hamilton wryly imagines the perfect Pop home with all the must-have icons of the day; the perfect physique, the latest gadgets, modern furniture, canned food, and access to Hollywood entertainment. Artwork like Hamilton’s, with its irreverent attitude and embrace of Americana, went on to inspire innovation in the world of design, particularly in home furnishings, with standout examples in this show including Studio 65’s star-spangled Leonardo sofa (1965). The exchange of ideas between Pop-era art and design can be seen at its most boundary-breaking in the celebrity screen-prints of Andy Warhol. Warhol’s ubiquitous images of icons like Marilyn Monroe, with all they have to say about fetishism and fame, fall into the category of art, but they are also savvy commercial designs. Bright, ostensibly cheerful and easy to mass produce, originals and copies of Warhol’s prints have remained popular, and lucrative, in the interior design industry for almost five decades. 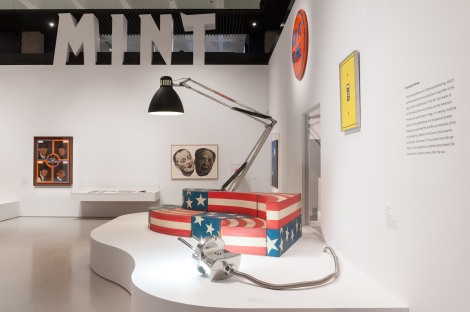 Even in cases where the art and design of this period stick firmly to their original functions, there is often evidence of a shared desire to break with tradition and explore new forms. Roy Lichtenstein’s painting Yellow Brushstroke II (1965), a slash of yellow paint frozen in the artist’s signature comic-book style, seems to triumphantly proclaim the death of the overwrought ideals of the Abstract Expressionists, who obsessed endlessly over spontaneous personal expression. In the design world, Peter Murdoch’s Chair thing (1968) pushed the boundaries of new materials and technology by making durable furniture out of chemical-coated folded paper.

With Pop Art Design, the Barbican makes the convincing argument that the art and design of the Pop era are best appreciated by being displayed together. Both disciplines sprang from the same desire to articulate and accommodate the realities of an increasingly commercial, liberal world and, for better or worse, worked hand in hand to revolutionise international creative markets and the aesthetics of 20th century art and design.

The exhibition is open until 9 February.