An edited version of this review was originally published in Mongoos Magazine. 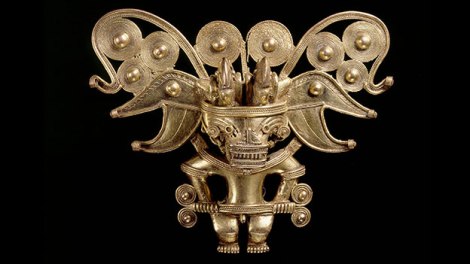 The British Museum’s dazzling new exhibition of artefacts from pre-Hispanic Colombia, Beyond El Dorado, Illuminates the important status of gold as a material for craft and art in ancient Andean spiritual life.

The show exposes the yawning gap between the European idea of gold as currency and the ancient Colombian concept of gold as a sacred material, resembling the sun and therefore capable of bringing people closer to the spiritual world. Long before the first Europeans arrived in the region and became obsessed with finding the mythical lost city of El Dorado to plunder for its valuable gold, pre-Columbian societies such as the Muisca, Quimbaya, Calima and Tairona had developed sophisticated methods of manipulating gold to craft body ornaments, decorations, musical instruments and votive figurines for ritualistic and ceremonial use.

Along with body painting, music and ritual coca chewing, wearing gold was an important symbol of power in ancient Colombian societies, conferring social and spiritual status on community leaders. Gold body ornaments, made to resemble birds, bats, monkeys or snakes, were thought to be magically transformative, empowering the wearer with the mythical qualities of the respective animal. The idea of gold as a physical embodiment of the supernatural was fundamental to the spiritual rites of these cultures, and this exhibition brings us closer to seeing the material in this quasi-mystical way. Sublime exhibits such as the delicate Muisca body decorations, with wafer-thin gold dangles, or the elaborate Caliman nose ornament, seem to radiate light like tangible pieces of the sun. The tiny votive tunjo figurines from Lake Guatavita, depicting stylised human figures, are exquisite, with an artistic and spiritual value far exceeding their weight in gold.

Beyond Eldorado is a rich and fascinating show, uniting the British Museum’s own collection of artefacts from the region with hundreds of objects from the Bogotá Museu del Oro (‘Museum of Gold’) and featuring many extraordinary pieces never before seen in the UK.

Beyond El Dorado: Power and Gold in Ancient Colombia is open until 24 March.