An edited version of this review was originally published in Mongoos Magazine.

The Royal Academy’s retrospective of the work of Bill Woodrow celebrates the British sculptor’s successes and the development of his career from art school in the 1960s to the present day. But while Woodrow’s superb technical skills are a common thread throughout, this exhibition exposes a distinct imbalance between the artist’s powerful breakthrough works and his more recent, ineffectual pieces.

Woodrow’s earlier sculptures are undoubtedly his most successful. Owing much to the Arte Povera movement, his popular works of the 1970s and 1980s feature inexpensive materials and everyday objects transformed into sculpture in innovative and inspired ways. Primarily concerned with materialism, Woodrow ‘fossilised’, disassembled or cut apart modern household objects as a direct and pithy commentary on throw-away culture. In Standing Stones (1979), a carpet sweeper and vacuum cleaner have been covered in concrete to create modern-day menhirs, with just enough of the original appliance visible underneath to give the impression of having been uncovered by archaeologists. With these ‘fossils’, Woodrow raises the sobering point that machines dedicated to convenience and home comfort are probably the contemporary objects that will most effectively epitomise our society for future historians. A preoccupation with these appliances extends also into works such as Hoover Breakdown (1979), which features the disassembled parts of a vacuum cleaner placed individually in line on the floor as if for scientific study: once again, Woodrow offers up the household machine as a modern subject worthy of serious analysis. The most imaginative of Woodrow’s works from this period can be found among his Cut-Out series, in which various appliances have been cut with shears and manipulated into new shapes; a bicycle frame unfurls from the metal casing of a spin dryer while a satellite, made from old washing machine parts, hovers in the air like a butterfly emerging from a chrysalis. Commenting on the built-in obsolescence of modern technology, Woodrow reanimates these dead objects and gives them a whimsical, fantasy afterlife. 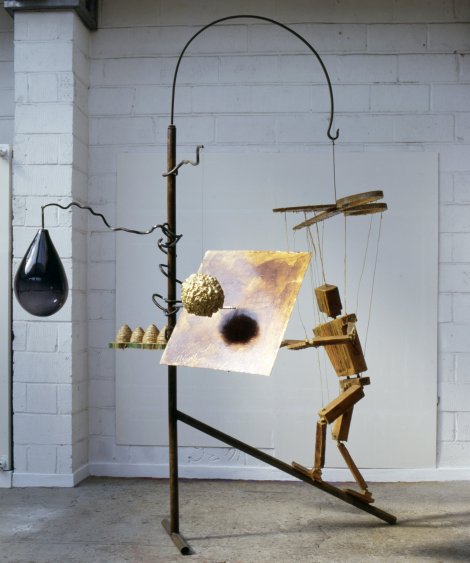 Adopting an increasingly varied range of materials in the late 1980s, including traditional bronze, Woodrow eschewed the playful directness of his early work in favour of a more symbolic approach to political and cultural questions. As such, many of the artist’s later sculptures suffer from an overwrought sense of moral self-awareness, employing metaphors that are alternatively too convoluted or obvious to the point of banality. Beekeeper and Four Hives (1997), for example, is an elaborate, slim structure made from a variety of rich materials including wood, steel, glass and gold leaf. Ostensibly concerned with the delicate balance between man and the natural world, the sculpture is otherwise overburdened with a confusing selection of opaque symbols; the result is an introspective artwork that seems to have more to do with Woodrow’s private beekeeping interests than with any external discourse. Similarly, Woodrow’s recent Black and White series of bronze and rubber sculptures, depicting Inuit characters toiling in frozen landscapes above underground reserves of black oil, is so unambiguously figurative that it fails to stir any emotion at all. While the message is obvious (‘Oil = Bad’), it is not clear what reaction the artist is trying to provoke with this work. Woodrow’s continued attempts to question modern man’s double-edged relationship with nature is perhaps commendable, but his recent artwork is so unprovocative that it cannot be said to add anything to public debate on the subject.

Yet for all that Woodrow’s later works lack a certain vitality, his undoubted technical skill makes this show worth a visit, if only to enjoy the object-based sculptures from the late 1970s and early 1980s, which are still extremely effective and testify to the artist’s once-impressive talent for imaginative innovation.

The exhibition is open until 16 February.