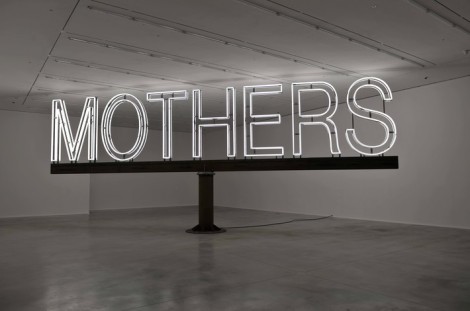 ‘What’s the point of it?’, the Hayward Gallery’s new exhibition of work by Turner Prize-winning artist Martin Creed, is a mixed bag of enchanting highs and disappointing lows.

At its very best, Creed’s method of using unconventional materials to express honest emotions has a direct and captivating resonance, particular in those pieces that deal with feelings from childhood. On entering the exhibition, visitors are confronted with the monumental Work No. 1092 (2011), a huge neon sign reading ‘MOTHERS’, that runs the length of half the lower gallery and spins at various speeds just a whisker above head height, supported by a central beam. It is a simple idea that evokes the dual nature of a mother’s totemic presence for a small child; enormous, beautiful, omni-present and fascinating, inspiring equal parts joy and fear.

Innocent mixed emotions are also the theme of Creed’s famous Work No. 200 Half the air in a given space (1998), which consists of a room half-filled with white balloons. Exploring the room is tremendously fun, but the experience is also tinged with a sense of trepidation. Balloons pop and static electricity builds as visitors lose their bearings in the enclosed, claustrophobia-inducing space. This is what it feels like to be a small child at play in a ball pool or a theme park – a blend of jolly adventure and the thrilling potential dangers of an unfamiliar environment. 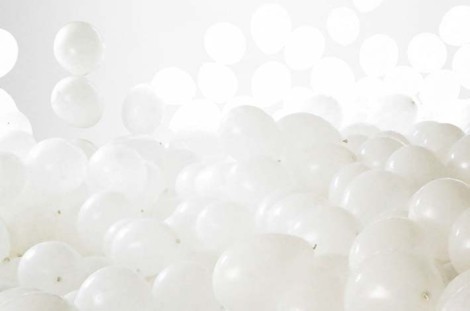 Martin Creed, ‘Work No. 200 Half the air in a given space’, 1998 (detail).
© the artist, courtesy Il Giardino dei Lauri. Image courtesy the artist

However, the majority of Creed’s work suffers from an unfortunate lack of critical editing. His practice of making art out of literally anything, whether it be the switching on and off of a light or even the filmed passing of faeces, is a triumph for artistic liberation in theory but, aside from a few interesting pieces, Creed uses his freedom to create a seemingly endless glut of silly, pointless things. There is nothing beautiful or thought-provoking about a recording of fart noises, a balled-up piece of paper, a pyramid of toilet rolls, a blob of blu-tack stuck to the wall or a thousand repetitive broccoli paintings. The exhibition is jam-packed with random ideas expressed as the sort of empty art that lacks both visual and conceptual punch. The title of the show, ‘What’s the point of it?’, anticipates the visitor’s inevitable question in the face of all this detritus-cum-art, but the exhibition does nothing to combat the frustrating sense of meaninglessness that runs through most of Creed’s work.